December 21, 2012September 21, 2015Leave a comment
﻿
If you ever wondered if you just pay more for designer labels then the release of the limited edition Hermes Leica M9-P camera has confirmed my suspisions. With a price tag of $50,000!!!! you might be asking yourself what do I get for such a vast amount of money.
Well the camera is strictly limited, instead of limited until next year or until they need a bit more cash, to 100. They are also MAKING customers who buy the camera sign to say they won’t sell the camera for two years.
You get a “unique” silver casing on the camera and of course calf skin leather, supplied by Hermes, which covers the casing and a leather strap included in the price, how generous!
The strangest line in Lecia press release for the camera is;
“In all other technical details, the cameras and lenses of the special editions are identical to those of the standard versions.”
So “Special Edition” is only skin deep.
The collaboration is a celebration of friendship between Jean-Louis Dumas, the former president of Hermès, who died in May 2010 and Lecia. Dumas was a keen amatuer photographer who never left his house with his, Leica & red note book.
You can buy his book on Amazon for around £40 and yes all the images in the book included in the Hermes Leica M9-P camera were shot on his Leica- I bet it didn’t cost him $50,000!
Designer collaboration price tags gone to far?
﻿﻿
October 28, 2011September 21, 2015Leave a comment 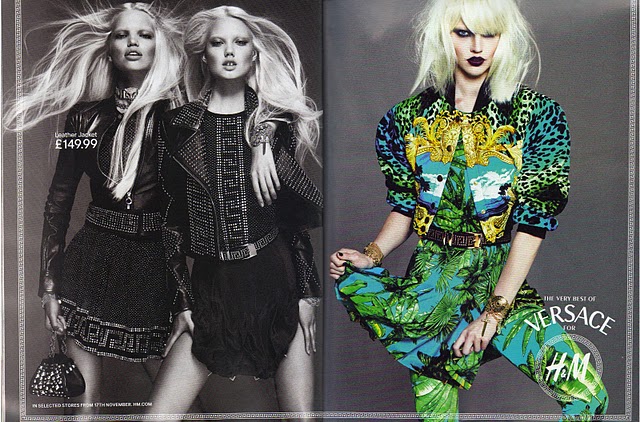 Ok so were all excited about the 17th November when we can get our hands on the H&M Versace collection. Its not for the faint hearted, but if past collection are anything to go by then its going to be a massive hit, the clashing prints is very on trend and will be able to be worn for a few seasons to come. You don’t have to wear them all at the same time, like above which I do love not something you would wear to nip to the supermarket, you can use one of the pieces to jazz your winter wardrobe, I will. Handbags at the ready for the 17th Nov!
Anyway even though its not been released yet it is already old news! The next collabaration is with……. The girl with the dragon tattoo of the Steig Larson trilology. I can’t wait. Punk inspired collection with piece such as tribal earing, skinny leathers, leather jackets, hoddies and more. 30 piece collection ranging from £3.99- £199. It will debut in Paris on the 28th November and then go on sale worldwide from the 14th December, availble online aswell under the divide range.